I’ve been shocked lately by mortality statistics.  My grim inspiration being a combination of: talking to my sister about gun violence statistics, reading a book on financial planning and helping a good friend out with a legal retirement issue (I ran simulations of his death 100 millions of times, fun!).  The most shocking thing what age are 50% of people dead by (both men and women).  This is best seen in this social security – actuarial life table:

Don’t want to look at raw data (I don’t blame you).  Here is an awesome data visualization that I take no credit for at all: 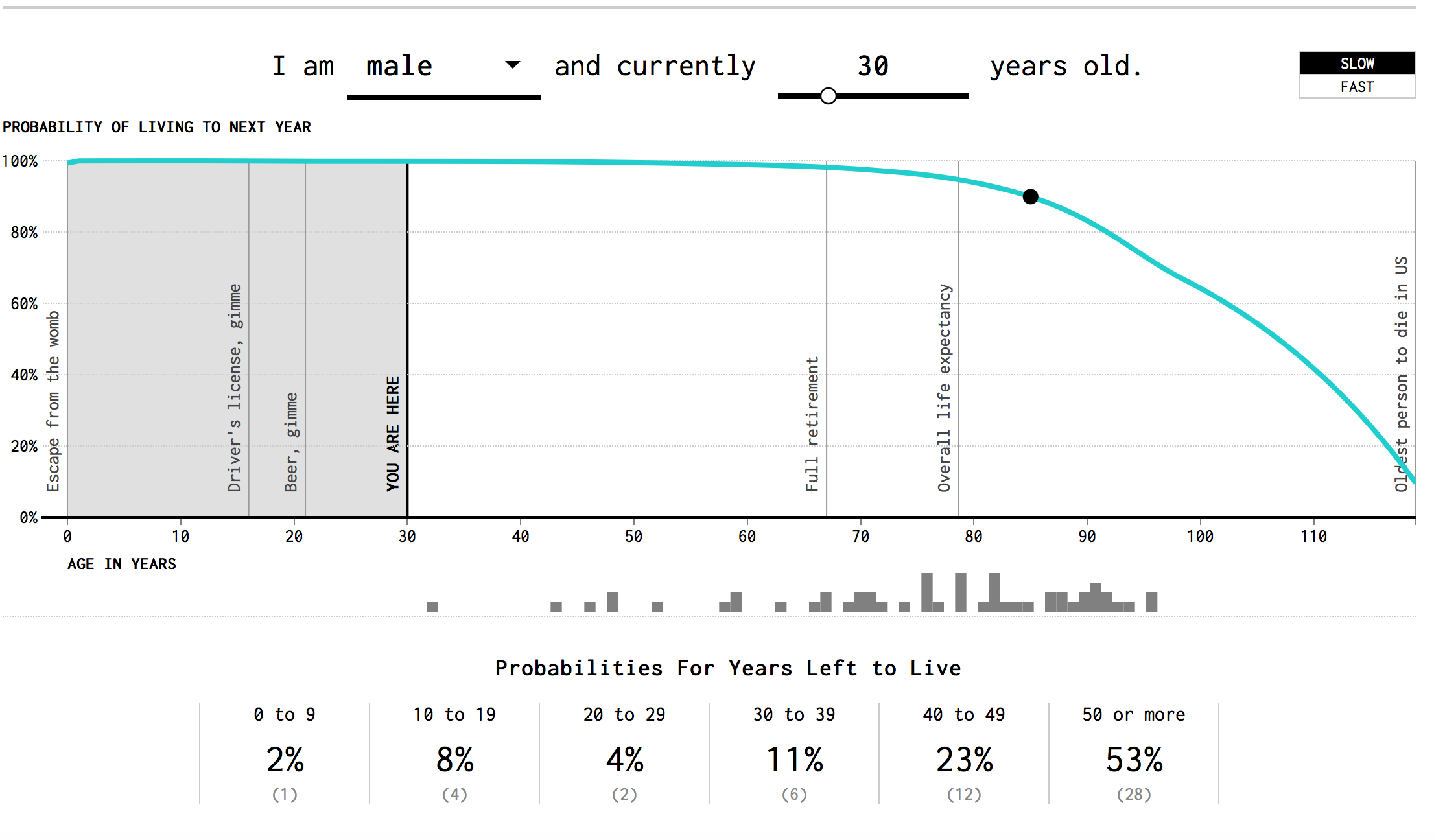 Note that like the actuarial tables, the odds of dying rapidly increase with age!

Did you realize the CDC has all 2.6 million or so deaths (per year) recorded in a database?  The data is anonymized!  Just in case you were worried!

I ended up running death statistics by age in a IPython notebook with my currently limited (but improving) understanding of Pandas.  Interestingly enough, I got approximately the same numbers (tallying all death counts).  If you want to do you own analysis, use Kaggle data set.

As someone in their early 30s, I had no sense of aging at all.  Instead, I’m constantly thinking about beautiful places to go on vacation or what to explore in the city (Boston).  Let’s add vacation and Boston photos to cheer the article up: 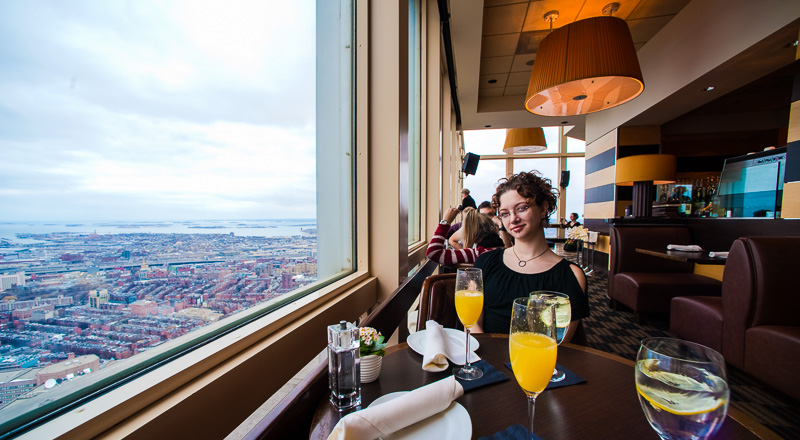 Top of the Hub!

Anyway, back to the statistics aspect!  What’s another cool factoid we could discuss!

I understand that the buzz in media is to implement gun control to prevent violent homicides.  Did you know that around twice as many people die in gun-related suicide events?  I wasn’t aware of this problem until my sister mentioned it!  Two graphs in Vox really spoke to me: 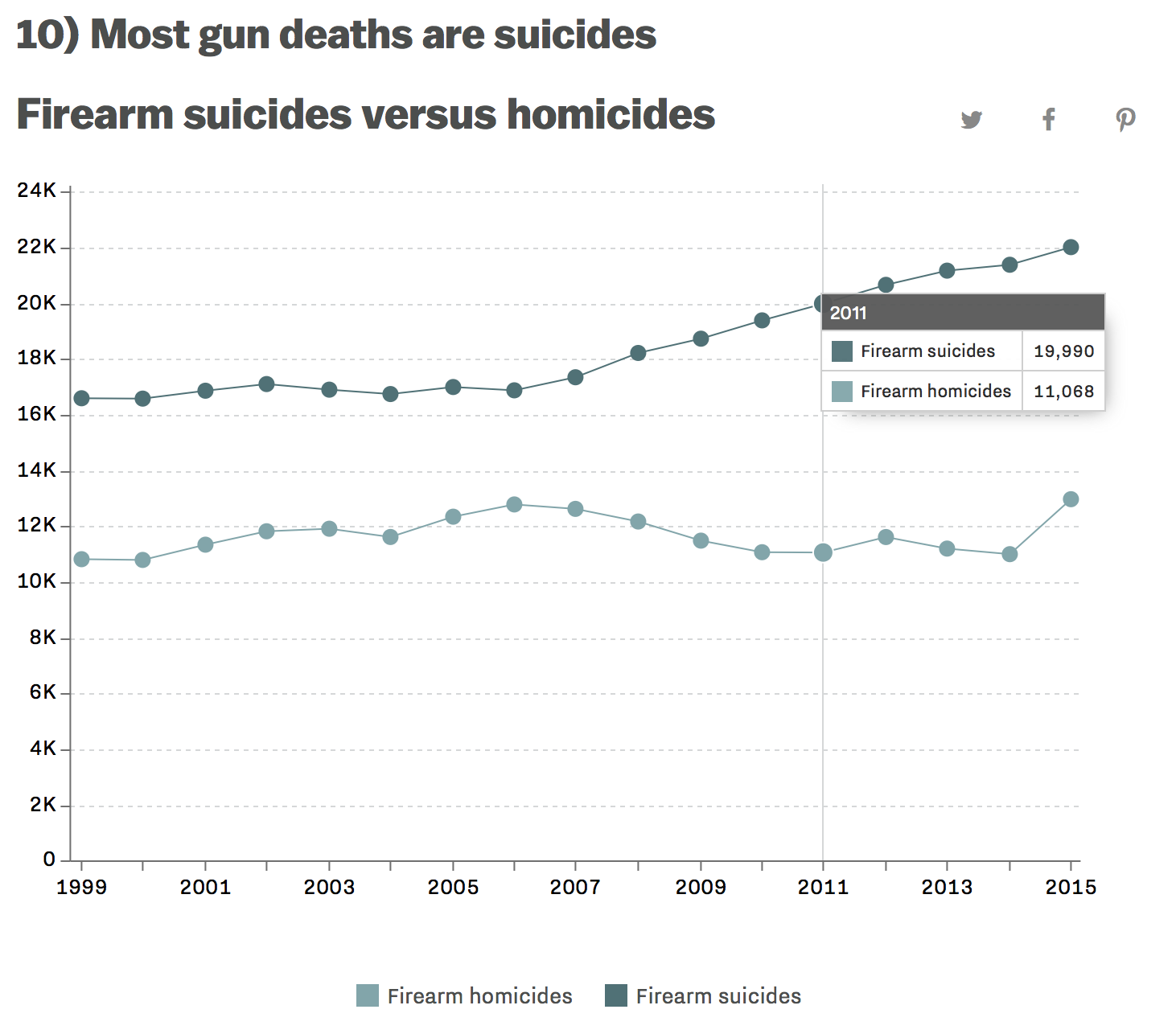 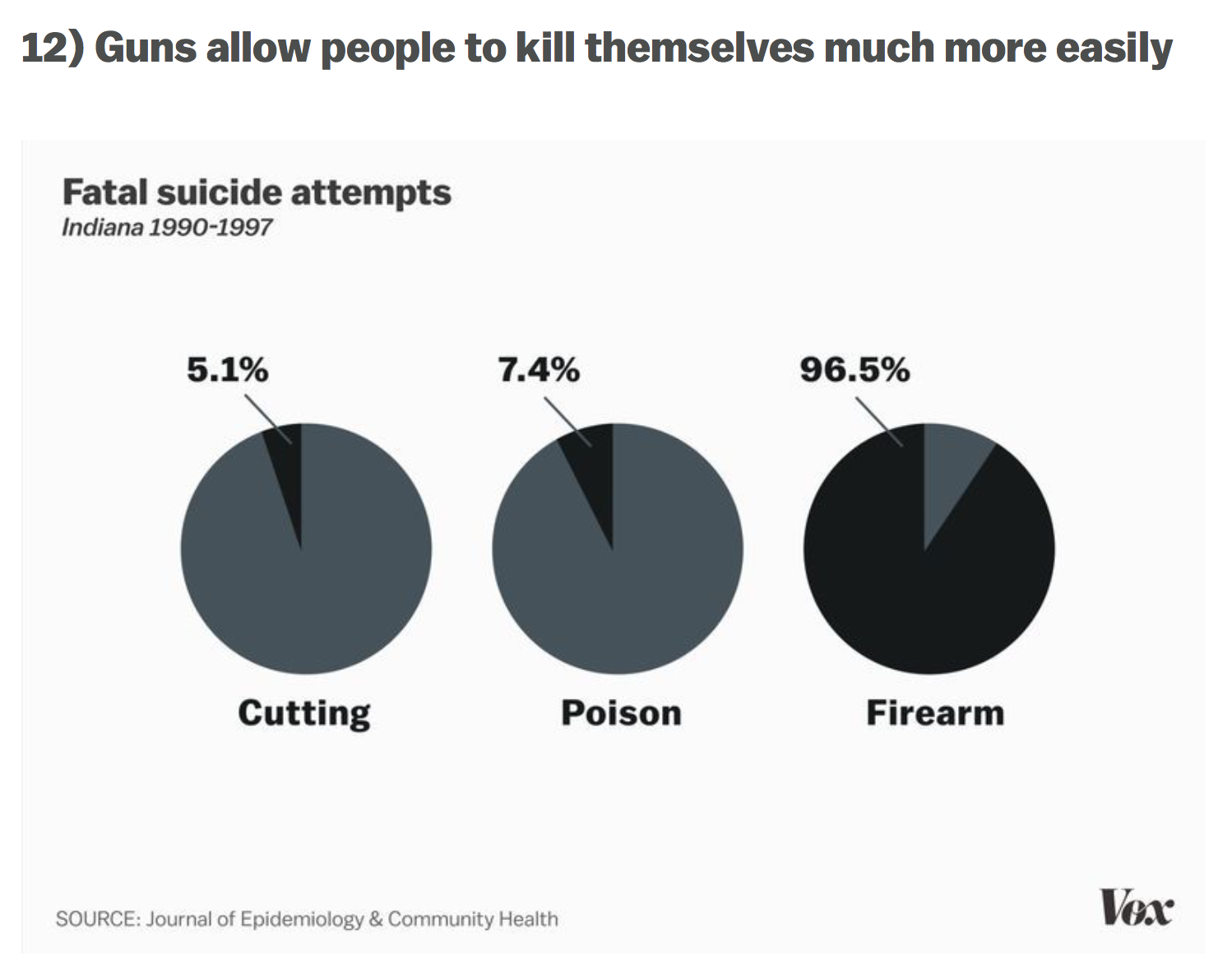 I don’t want to get too deep into gun control (the news covers it well enough), but I do find it interesting that no one in the media talks about what seems to be a huge issue!  Something that claims 2 times the number of lives as gun homicide involving the exact same weapons (guns are involved in 50% of suicides)!

Just to provide a second source, here is a wikipedia chart: 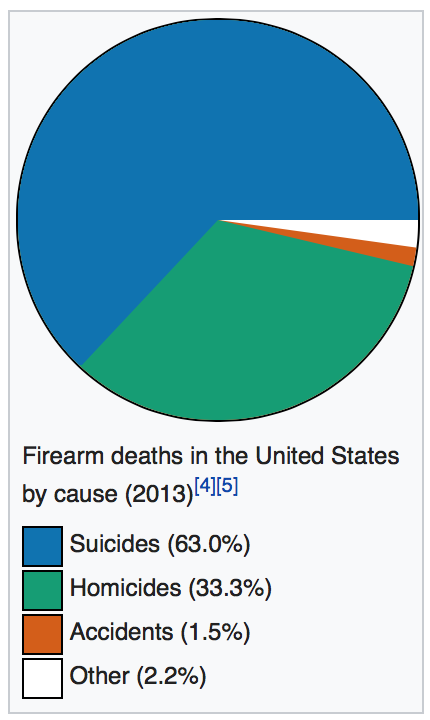 If you read a little more on the wikipedia article, you can find some interesting information.  For example, only 1% of gun homicide involves mass shootings (often shown on televisions) quote from wikipedia:

When I think about mass shootings, it usually involves a child who got an AR-15 and decided to vent his anger on the student body.  What does the typical homicide look like?  It happens that 75% of these homicides are caused by handguns.  Shotguns and assault rifles only account for about 9% of gun-based homicides:

I am not in any way making an opinion about outlawing assault rifles.  Instead, I’m looking at the data and coming to the conclusion that handgun related deaths are much more common (draw any conclusion from that): 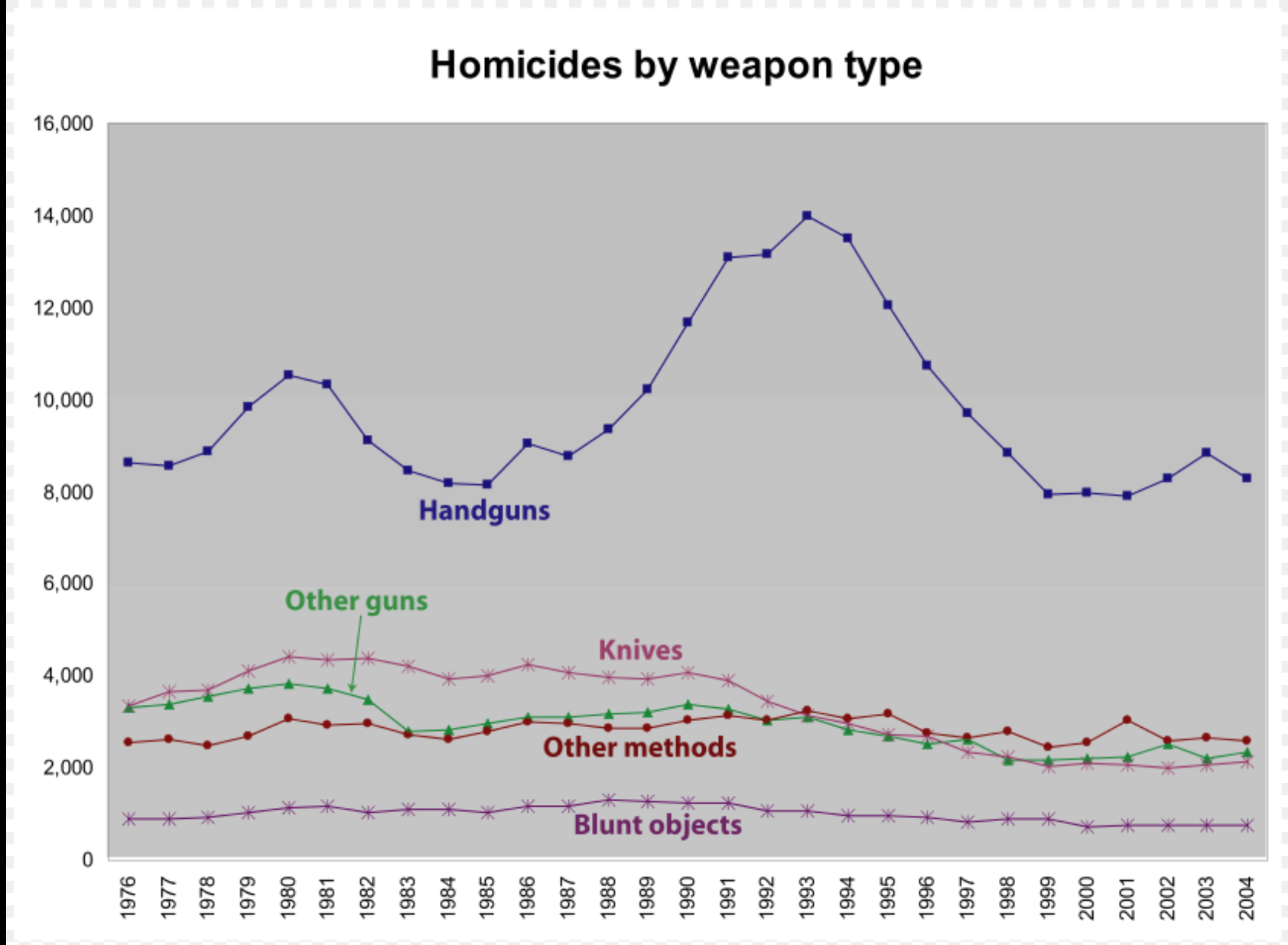 Another interesting chart on wikipedia is the homicide by offenders age.  The clear outlier here is the age group: 18-24 with 14-17 year olds being more prominent in the 1990s.  25-34 year old range seem to swap places with 14-17 year olds around 2000 becoming the second most violent group!  Alright, we understand the perpetrators, but what about the victims? 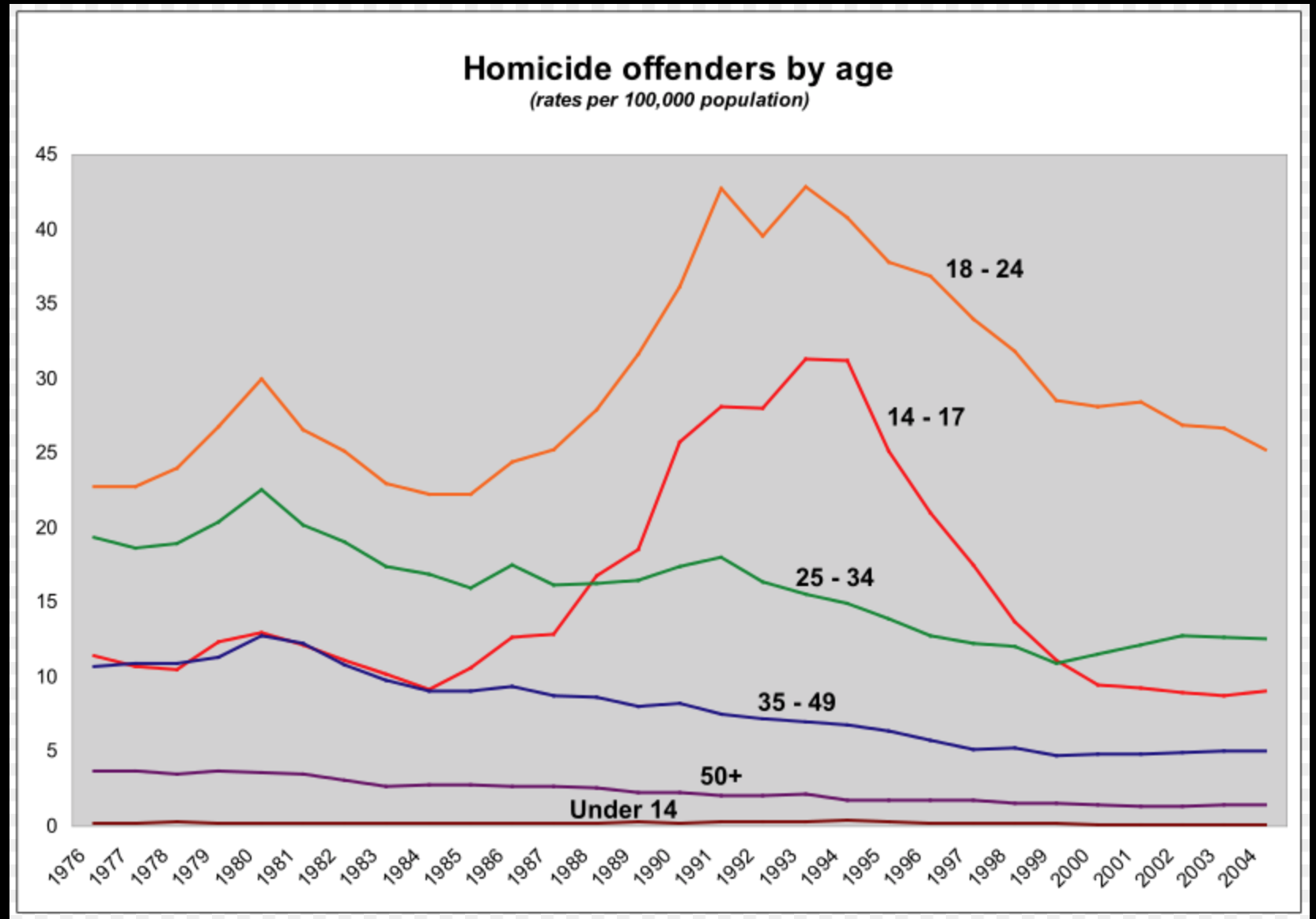 How common is it to die from homicide (all) and let’s bring in suicide as well!  This CDC paper had some really great charts in it: 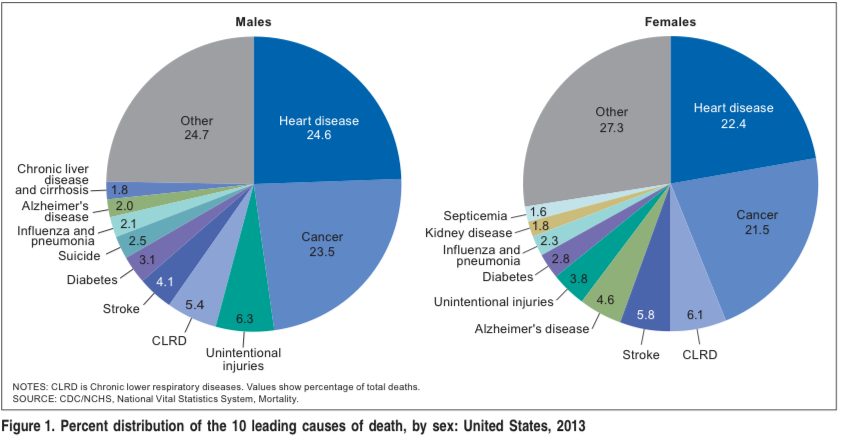 It’s not big enough of a problem to be listed as a top 10 leading cause of death in the US (suicide is a top 10 killer for men: 2.5%).  The more interesting part comes when you break it down by age group: 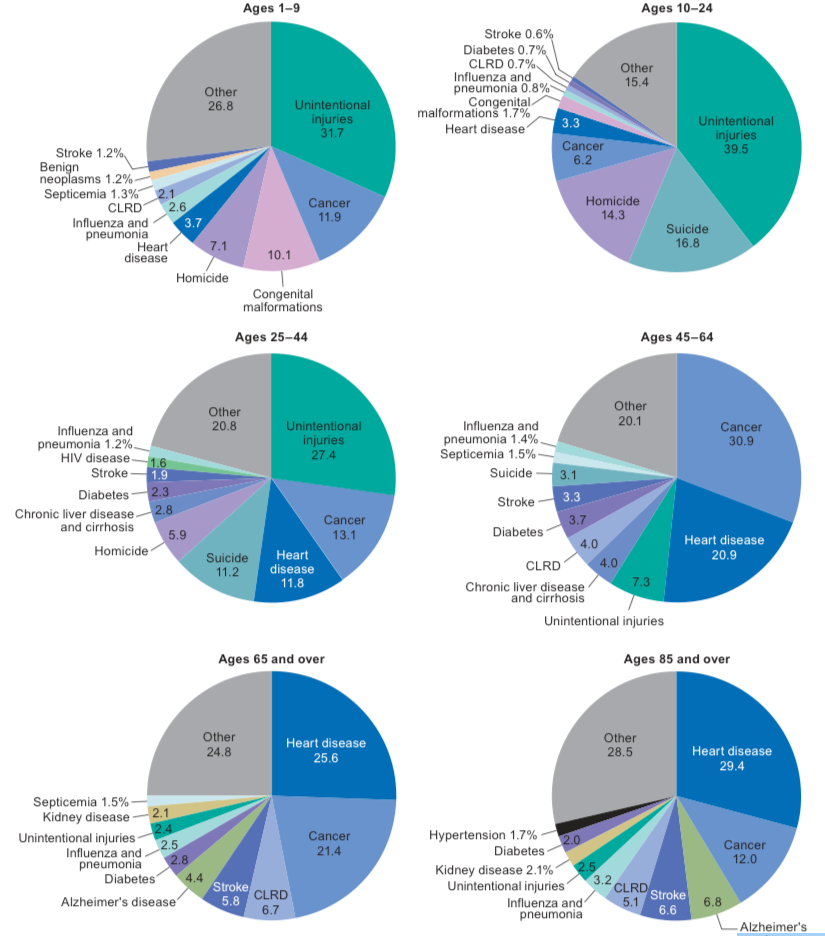 It ends up that suicide and then homicide are responsible for significant percent of deaths between 1-44 and taper off at around age 45 when other diseases become more prevalent.

With such huge percents, you would think that suicide and homicide would be top topics for our society.  The above pie charts misinterprets the amount of deaths.  The odds of dying young are rare!  Only 5% of people die before the age of 45.  That’s less than 200,000 of 2.6 million deaths.  Overall around 10,000 of 2.6 million deaths are associated with gun homicides: .4% of US deaths (all homicides are around .6% of all US deaths).

Gun-related Deaths: The Devil is in the Details!

Data can tell sad stories.  Three of those stories involve: men, old white men and young black men.  An article in fivethirtyeight.com provides the data visualization below (click to interact with it yourself): 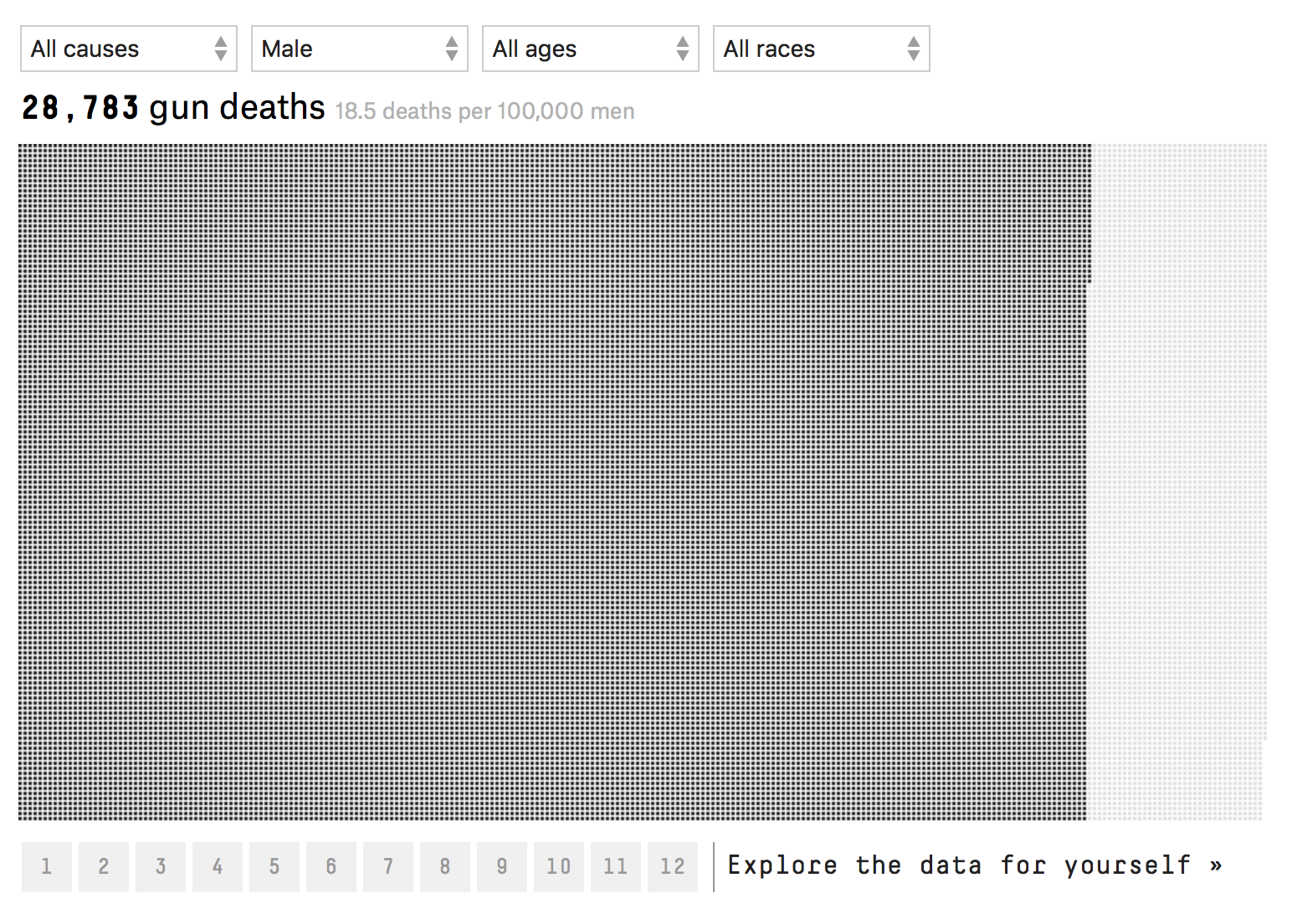 85% of gun-related deaths involve male victims.  Men are 6 times more likely to die from guns than women.  Within the male only group, two groups of victims stand out: old white men and young black men.

Like most things in life, I often have no sense of scale.    I know for example that around 50% of deaths are caused by Cancer and Heart Attacks.  I have no clue how that varies by age.  The below graphic was really interesting, click to access the interactive variant (provided by flowing data.com): 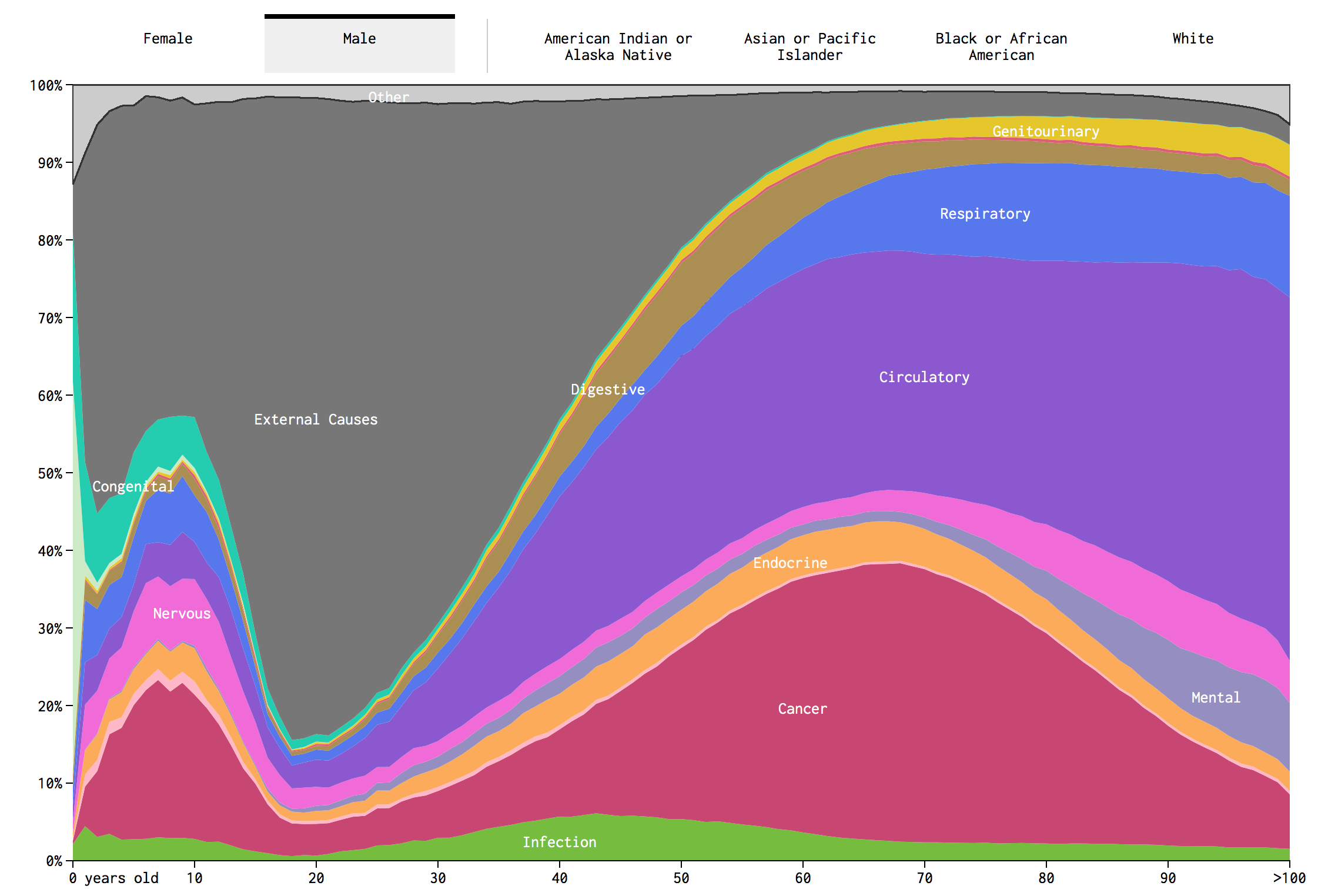 Another cool version of the above data is a simulation done by Flowing Data, click to access the interactive article: 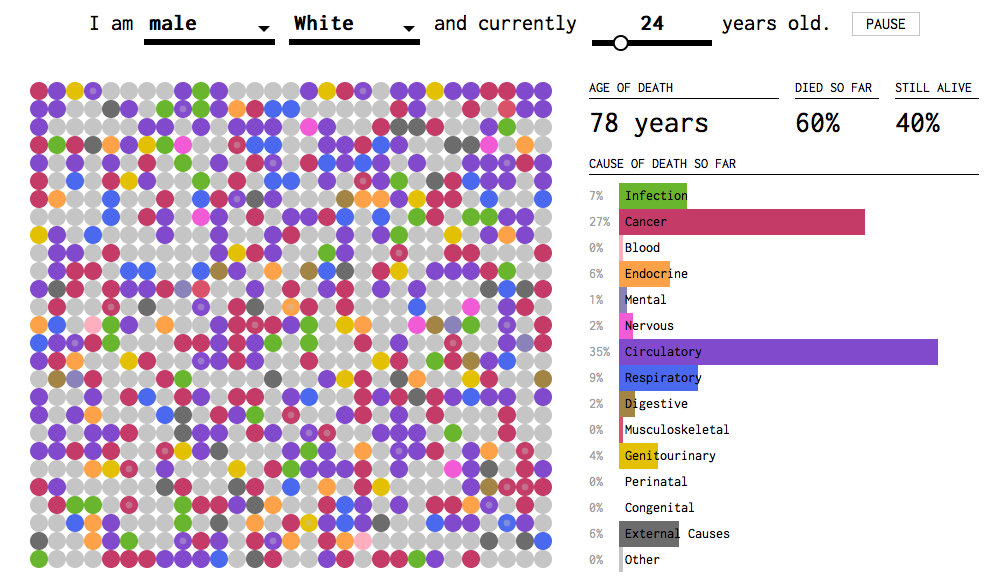 My big conclusion on this is that most deaths are related to age-related/life style disease!  That definitely explains the average life expectancy is in the late 70s and 80s.

What is the most important conclusion I got out of this?  Mass shootings with assault rifles is a very rare incident.  That doesn’t make it any less tragic.  On the other hand, homicides with handguns are significantly more common.  Homicides involve a handgun 75% of the time.  The perpetrators and victims are typically under the age of 45 and these deaths represent .4% of all US deaths in a given year.

Only 1 in 20 people die before the age of 45.  The great killers are lifestyle and age-related diseases that become more common after the age of 60.  The amount of deaths increases drastically over time (actuarial tables).  Two diseases: heart attack and cancer account for 50% or around 1.2 to 1.3 million deaths a year.  That’s a staggering number compared to both suicides (around 40,000) and gun-related homicides (around 10,000).  That is, you are 120 times more likely to die of heart attack or cancer than violent gun homicide.

What are your thoughts on the topic?  How do you think scale of the problem should influence public policy?  Do you think we should view mortality rates differently based on age brackets?  How does the media influence on perception of death?  I tried to make this as apolitical as possible so that the data speaks for itself.

Any great data visualizations or research on the topic?

Most of the data was derived from the CDC and wikipedia!

Now, for a bit of happiness to improve everyone’s mood (distract from the morbid topic).  Here is a kitten hanging out!